This special show honors the classic country music which made the genre what it is today and recognizes the country artists who made those songs so memorable. Usually, Larry Gatlin from Larry Gatlin & The Gatlin Brothers hosts the Opry Country Classics show but Bill Cody took over the hosting duties for this particular show. 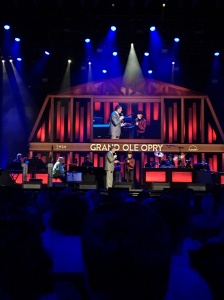 The first musical guest of the night was Grand Ole Opry member, Jeannie Seely. She was thrilled to be apart of the show! “These nights are always special to me because we’re remembering the real country classics of the Grand Ole Opry that has sustained all of us for many years so I’m always happy when I get to do this show.” said Seely.

Jeannie Seely performed three songs during her segment which included Little Jimmy Dickens’ Another Bridge To Burn, Jimmy C. Newman’s Jambalaya (On The Bayou) and she covered Kitty Wells’ song, Makin’ Believe. “Tonight we’re remembering and kind of paying tribute to some of those who came before us and I want to honor a lady that I’ve admired so much my whole career.” said Seely talking about country artist, Kitty Wells.

The next country artist on stage was a very special one, Dion Pride, the son of country music icon, Charley Pride. He came to the Grand Ole Opry on this night to honor and remember his father as his 88th Birthday would have been the following day. “Thank you for coming and celebrating my dad, I miss him so much.” shared Pride. For his first song he performed Charley Pride’s song, Six Days On The Road which was featured on his dad’s live album. “I just wanted to do something upbeat because Dad was so upbeat,” Pride continued, “so I wanted to do something festive for him.”

Dion Pride’s second song he performed he dedicated to his mother with the tune entitled, Amazing Love. One of the sweet things about the whole performance is Charley Pride’s piano player, Danny Hutchins was there performing as well. Right before Pride performed his last song, he took a moment to kiss the famous Grand Ole Opry circle. “This is something I wanted to do before I left. This is hollowed ground, I feel honored to be here, I had to do that.” said Pride. He closed his portion of the show with an amazing performance of Charley Pride’s song, Mountain Of Love! 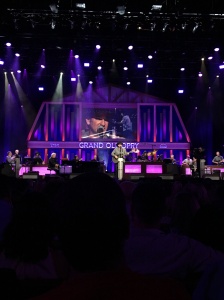 The third country artist of the night was Craig Campbell! “It’s always an absolute honor, blessing to be on this stage.” said Campbell. He performed three country music classics including McBryde and The Ride’s Sacred Ground, Diamond Rio’s Mirror Mirror and a incredible performance on the piano of George Strait’s song, The Chair. “I particularly love the Opry Country Classics show because I get to come out here and sing some of my favorite songs that I use to sing before I ever moved to Nashville,” continues Campbell, “These songs right here are the reasons I fell in love with country music in the very first place.”

A great country music artist who was the runner up on Season 21 of NBC’s The Voice, Wendy Moten was the next artist on this portion of Opry Country Classics. The country singer is originally from Memphis, Tennessee but has lived in Nashville for many years, which makes for a great country and soul sound from her. She put her own unique twist on three songs as well including Billie Holiday’s All Of Me, Jeannie Seely’s song, Don’t Touch Me and Miles Davis’ Bye Bye Blackbird.

The spotlight artist of the night was Tennessee native, Craig Morgan! He was definitely excited to be apart of the Opry Country Classics Show! The singer songwriter performed five songs during his set including Gene Watson’s When A Man Can’t Get A Woman Off His Mind and Merle Haggard’s Workin’ Man Blues. For the first time, he did a intriguing cover of Crystal Gayle’s hit song, Don’t It Make My Brown Eyes Blue!

Along with those songs, he did a fantastic performance of John Conlee’s big hit, Rose Colored Glasses and he talked about how Conlee was a big influence to him musically. “This song was one of the songs that made me want to sing country music and the man that sings this song truly made me want to sing country music with every song that he ever sang. To this day, he’s a mentor and a very dear friend,” continues Morgan, “I do love that song. That is one of the greatest country songs ever in my mind. He sounds on this stage today just like he did when he recorded those songs.” Before closing the show, Craig Morgan performed his very first big hit from 2002 entitled, Almost Home.

There’s no question, the Opry Country Classics is definitely a show you don’t want to miss! Whether you are a big fan of country music or you’re a little newer listening to the genre, this show is a wonderful way to appreciate the classics and learn more about how the music came to be.

Have you been to the Grand Ole Opry before? I’d love to hear your thoughts, so leave me a comment below or on social media!