The iconic country music artist, Charley Pride was born on this day in 1934. As today would have been the singer’s 88th Birthday, his son, Dion Pride performed at the Grand Ole Opry on Thursday night in honor of his father.

A Texas native, Dion Pride was one of five featured artists on the Opry Country Classics show, which showcases country artists recognizing those who came before them in country music history and performing a few covers of songs from other country artists. 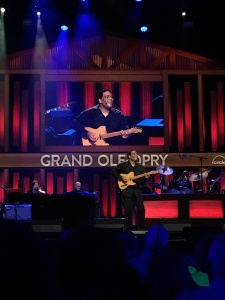 Dion Pride was extremely excited to be at the Grand Ole Opry for this special occasion. “I tell you, thank you for coming and celebrating my dad, I miss him so much.” said Pride. The first of three songs he performed was Charley Pride’s Six Days On The Road which was featured on his live album. 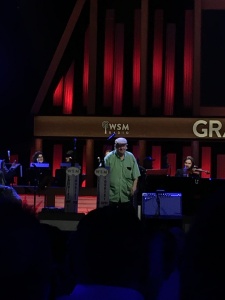 One of the special things about Dion Pride’s performance is Charley Pride’s piano player, Danny Hutchins was there performing as well! The second tune Pride performed was his dad’s song, Amazing Love. He dedicated the song to his mother and talked about how most of Charley Pride’s love songs was influenced by his wife.

“So now, I’m going to do something pretty for you,” continues Pride, “This was one of my favorite songs of my father’s. I always felt like, and he said this, that a lot of his love songs were inspired and picked, he picked them all for my mother. Anybody that knows my extraordinary mother, I’m going to do this for her.” 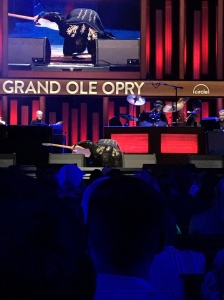 When Pride was on stage, right before he performed his last song of his portion of the show, he took a moment to do something for himself. “This is something I wanted to do before I left, you can laugh if you want,” said Pride. He then leaned down and kissed the famous circle on stage in honor of his dad. “This is hollowed ground, I feel honored to be here, I had to do that.” expressed Pride.

Dion Pride performed an awesome performance for his last song of the evening which was Charley Pride’s Mountain Of Love with a standing ovation and again thanked everyone for the opportunity to be there! “I’m so grateful, I’m so honored, it’s my honor, thank you so much!”

The host of Opry Country Classics on this Thursday night, Bill Cody talked to Dion Pride for just a moment about Charley Pride right before he exited the stage. He wanted to share that he remembers his dad as much more than just a performer and hopes his fans will remember him for more than that as well.

“You know I’ve done so many interviews since he passed and you know they want to talk about his accomplishments and the one thing that from a son’s perspective, his accomplishments to me were a by product of what he loved. Believe me he loved entertaining for you but as a son, my father the man he was, the man and the teachings and the lessons, all of the things, humility, humbleness, respect, all those things, I just think he was a greater man than his accomplishments and I just wanted people to know that.” said Pride.

Charley Pride is definitely a trailblazer when it comes to country music. His son, Dion Pride is doing an amazing job honoring and keeping his father’s legacy alive and well!

Be sure to keep up with Dion Pride at his website, www.dionpride.com. You can learn more about the Grand Ole Opry as well by visiting their website, www.opry.com.

Are you a fan of Charley Pride? I’d love to hear your thoughts, so leave me a comment below or on social media!