A few country music artists came out for a special Grand Ole Opry show, as it was on this certain night, it happened to be the 18th anniversary of 9/11. Some of the stars appearing that night was Jeannie Seely, Rory Feek from Joey + Rory, Russell Dickerson, Lindsay Ell, Dustin Lynch and more hosted by Charlie Mattos.

The first segment started out with the lovely Opry member Jeannie Seely, performing a couple songs for the crowd. When beginning to perform one of the songs Seely said quote, “We’re gonna try this for the first time tonight.” This song, Like I Could, is a song Seely co-wrote with fellow country songwriters, Erin Enderlin and Bobby Tomberlin.

While the great group of songwriters wrote the song, it was recorded by Rhonda Vincent and has gone to #1 on the charts. Jeannie Seely talked about how she was happy Vincent recorded the song by saying, “We all just love Rhonda so much for taking that song to #1 with us.” Jeannie Seely just also had a special milestone, as she recently celebrated her 52nd Anniversary as a Grand Ole Opry Member. The country singer closed out her portion of the show by saying quote, “We hope you have a wonderful time!”

Up next was a upcoming country artist, Joshua Hedley. He performed a couple of songs from his recent album including the title track, Mr. Jukebox, along with Weird Thought Thinker and I Never (Shed A Tear). 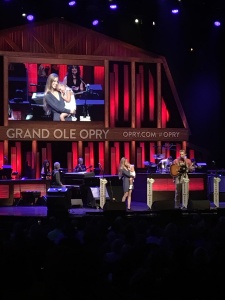 There was a lot of excitement for the next artist on the stage, Rory Feek from Joey + Rory. The singer also had his daughter, Heidi Feek singing background vocals with him and let his youngest daughter, Indiana (Indy) make a small appearance on stage as well. He was thrilled to be back at the Opry saying quote, “This is a special night for me.”

Feek performed two songs that he wrote, the first one being A Little More Country Than That recorded by Easton Corbin, and the second tune being a popular song that Blake Shelton recorded called, Some Beach. It was a special treat for everyone as Feek brought out two special guests, Randy Travis and Paul Overstreet! 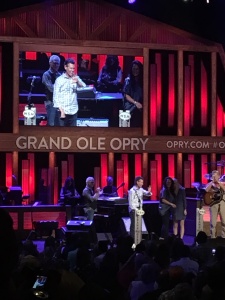 There’s no doubt that the crowd was surprised when the two special guests came out! While Travis was on the Opry Stage, Feek and Overstreet sang a small part of Travis’ popular tune, Forever and Ever, Amen, to him as Overstreet was one of the songwriters on that song. Before that, Feek let Paul Overstreet perform a song himself as he hadn’t performed at the Opry for over 20+ years and he sang a song fitting for 9/11 called, Seein’ My Father In Me.

The very energetic, Russell Dickerson was the next artist up on the Opry. He was grateful to be at the Grand Ole Opry for his fifth time performing by saying “Never take this circle for granted” and “I look up to so many people here.” He got to perform three songs during his set, Every Little Thing, his second #1, Blue Tacoma and Yours.

Dickerson took a moment before he performed his last tune of the night, to honor those who were involved during 9/11 and to talk about his last song he was going to sing, Yours. “I wrote this song about the most special person in my life.” said Dickerson. “This is my first song to ever go to country radio. God bless y’all, thank you for changing my life. I wrote this song about the one who changed mine.”

As the night was winding down, two more country artists came out to perform, one being female artist, Lindsay Ell and she performed some of her songs, Waiting On You, Castle and Criminal. Following Ell’s performance, was The Del McCoury Band as they sang a couple tunes including the bluegrass breakdown and a wonderful cover of Summertime Is Past And Gone originally by Bill Monroe. 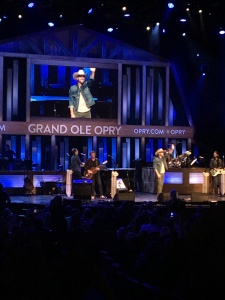 The last performer of the night everyone was excited to see, Dustin Lynch! He was very happy to be playing that night by saying, “We’ve never had this long to play on the Opry stage in our life, this is great!” It was a special night for Lynch as his parents was also there in attendance.

Lynch performed six songs before closing the show that included the debut of him performing his latest single on the Opry, Ridin’ Roads, along with Small Town Boy, Where It’s At, and Good Girl. When he performed his very first single, Cowboys and Angels, he dedicated the song to his parents. “I wanna play this song for my mom and dad, it’s a love story.”

Check out our small gallery of photos from the show!

Have you ever been to the Grand Ole Opry? I’d love to hear your thoughts, so leave me a comment below or on social media!