In case you haven’t heard of Home Free before, they are a capella country group who won Season 4 of NBC’s The Sing-Off and has been rising in the music scene ever since. Home Free is made up of five members, Austin Brown, Tim Foust, Rob Lundquist, Adam Chance and one of the founding members, Adam Rupp.

The thing that makes this group so unique, is every performance they do is completely done a capella, meaning they make all the music with their voices. They just released their sixth album, Dive Bar Saints on September 6th.

Home Free always steps up to the plate when it comes to their albums and they did just that with Dive Bar Saints. For one of those reasons being is they have 10 brand new original songs on this project with only two cover songs, meaning this is the most original music they have ever released at one time.

The two cover songs that Home Free did decide to record for this new album includes an absolute chilling version of Vince Gill’s song, Go Rest High On That Mountain, along with a incredible cover of John Denver’s song, Take Me Home, Country Roads.

When listening to all the songs on this album, you can tell each one is special in its own way. A couple tunes that could easily be stand out songs on the project would be Remember This, Cross That Bridge and Dreamer. There’s no doubt that Home Free is definitely creative with their music, from the lyrics to the vocals and to the instrumental parts of the songs as well. 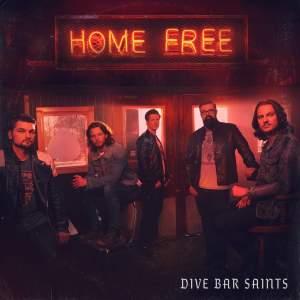 What do you think of Home Free’s new album, Dive Bar Saints? I’d love to hear your thoughts, so leave me a comment below or on social media!