A upcoming country music artist, Macy Krew, from Nashville, Tennessee, although she is originally from Grand Rapids, Michigan, is starting to make her way through the country music scene.

The singer songwriter recently got to chat with me about a few things such as how she got into music and who are some of her musical influences! Along with that, Krew also talked about her experience on the latest season of American Idol, and about her latest single, Playin’ With Fire!

Emily Ann Wells: Who are some of your musical influences?
Macy Krew: A lot of the women in country music are my inspirations and influences. Kelsea Ballerini, Carrie Underwood, Carly Pearce, and Kelly Clarkson are ones who have an impact on my songwriting and music. I love the power and creativity these women bring to the table and they push me to work harder and dream bigger.

EAW: How did you become interested in music?
MK: Music and singing has been a part of my life since I was a little girl. I learned to sing before I could talk. Being on a stage is my favorite place to be; it’s where I feel most comfortable and confident. There isn’t a day that goes by that I could ever imagine my life being without music. It helps me express myself in ways I never thought possible and it’s what truly makes my heart happy.

EAW: What made you decide to audition for American Idol?
MK: American Idol was a crazy, fun, insane experience. I had watched the show since season 1 when Kelly Clarkson won. I made it all the way to Hollywood week, where I nailed my audition after singing “My Church.” Of course, Luke Bryan was my favorite judge and he was genuine in how he pushed for country artists to stay. I learned a lot about myself and I’ve came out even stronger after that whole experience.

EAW: What do you think the best part was about your experience on American Idol?
MK: The best experience on the show was growing myself as an artist. I realized I didn’t need to rely on other people or shows to be successful. I made lifelong friends and developed my songwriting and artistry to a new point. Once I officially got home from the show, I was able to reach new heights with my music and shows. Everything took off from there and through my hard work and dedication, it’s continued going.

EAW: You just released your song, Playin’ With Fire. What was it like releasing it?
MK: My new song is a sassy one, but “Playin’ With Fire” is one that I’m so proud of. The release week of it was absolutely crazy! Everything from tv interviews and radio features…I still can’t believe how many people picked it up the first week. I’m so grateful to each and every thing that’s happened because of this song so far. This song is about staying strong, not allowing people to mess with you, and using your anger as a fuel to push you further in life. I hope people can turn it up and feel more powerful singing the words. 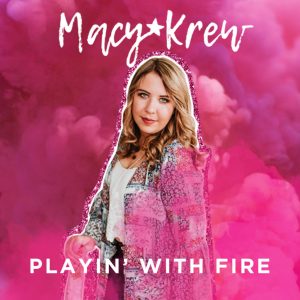 EAW: If you could accomplish any one thing in your music career, what would you want it to be?
MK: As far as my music career goes, I have so many different goals. A dream of mine is to play the Grand Ole Opry someday. I want to leave a lasting mark on the female country music scene, as so many amazing women have done over the years.

EAW: What can fans expect from you for the rest of 2019? Any new music?
MK: 2019 is going to be a big year! I’m working on more songwriting things. I’ve had over 50 shows this summer which has been incredible. I’ve been back and forth between my hometown in Michigan and Nashville, TN. In less than a month, I’m officially moving down to Nashville to stay! I couldn’t be more excited about that; I’m hoping for tons of new collaborations and songwriting sessions, and of course, shows! Y’all will have to stay tuned on my social media @macykrewmusic or my website: www.macykrew.com to see where I’ll be next.

There’s no doubt that Macy Krew is definitely a great artist. She is very wise as she took her experience from being on American Idol and used what she learned from it to not only make herself better as an artist but also in her music career. You can easily tell that Krew has the passion and dedication to her music which will take her a long way in her musical journey!

What do you think of my Exclusive Interview with Macy Krew? I’d love to hear your thoughts, so leave me a comment below or on social media!

One thought on “Exclusive Interview with Macy Krew”