Back in May, the ABC network announced that it was not renewing their beloved series, Nashville, which has been filmed on location in Nashville for the past four years and has fueled an increase in tourism in the city. After the announcement, tens of thousands of fans (or “Nashies” as they refer to themselves) took to the internet, armed with the hashtag, #BringBackNashville, in an effort to save the show, or in hopes that another network would pick it up.

Only one month later, their efforts paid off when it was announced that Nashville-based cable network, CMT, was picking up the series and would produce the 5th season. The popular streaming service, Hulu, will also be streaming new episodes beginning the day after they premiere on CMT. 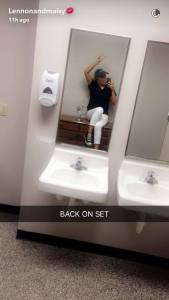 After an entire summer of anxiously waiting for more details, fans recently learned that Nashville will debut on it’s new home on January 5th, 2017 with a special two-hour premiere! The fifth season will include twenty-two episodes, and is already in production. Lennon Stella, who plays the character Maddie Jaymes on the show, recently posted a photo on Snapchat saying that she was back on set!

When Charles Esten recently performed at the Grand Ole Opry in Nashville, he brought out the show’s creator, Callie Khouri, to announce the premiere date.

Now for the bad news. Rumors are circulating that Connie Britton (who plays Rayna Jaymes) will be leaving the show after the first ten episodes. Britton has yet to confirm whether or not this is true, but for now, fans are hoping that these rumors aren’t true.

In better news, the rest of the main cast have all signed on to do the fifth season, including Hayden Panettiere, Charles Esten, Sam Palladio, Jonathan Jackson, Clare Bowen, Lennon Stella, Maisy Stella, and Chris Carmack. Will Chase (who plays Luke Wheeler) and Aubrey Peeples (who plays Layla Grant) are rumored to be coming back to wrap up their storylines but not as series regulars.

What do you think about Nashville going to CMT? Are you excited? If Connie Britton leaves, will you countine to watch? Let us know your thoughts in the comments below or on social media!

One thought on “The Reality Of Nashville Season 5”