One of the greatest nights for traditional country music recently happened on October 29th in Jonesboro, Arkansas as country music artist, Cody Johnson along with Ian Munsick and Easton Corbin performed a show at the First National Bank Arena!

The first opening act of the night was Wyoming native, Ian Munsick and it was his very first time performing in the natural state! “Nice to meet you, Arkansas! It’s an honor to be here.”

He performed several songs of his own making his presence known with his first song, Humble, followed by Come Home To You, Solo and a brand new tune which is unreleased entitled, Cowboy Killer.

“We got good country music!” exclaimed Munsick during the show. The artist performed another tune entitled, Long Haul which is his current single at country radio. “This is my love song to the West.” Before closing his part of the show, he performed two more songs including his amazing cover of Fleetwood Mac’s song, Dreams and Munsick’s own, Horses Are Faster. “I love you, Arkansas! Thank you so much!” 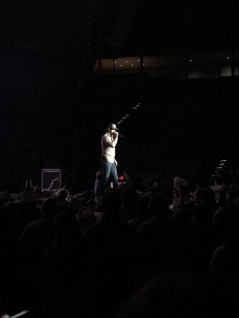 The second artist of the night was Florida native, Easton Corbin! He talked highly about his fellow tour mates, Ian Munsick and Cody Johnson. “Well I can promise you out of all three of us, we going to bring some country music to Jonesboro!”

Corbin brought a great country vibe to the crowd while he performed several songs of his including Somebody’s Gotta Be Country, Lovin’ You Is Fun, Clockwork, Roll With It, Yup, Are You With Me, A Little More Country Than That, A Girl Like You, Baby Be My Love Song and All Over The Road.

He performed two country covers during his set as well including Hank Williams’ song, Hey Good Lookin’ and Merle Haggard’s tune, Mama Tried. Corbin closed his part of the show with saying, “Jonesboro, thank you so much! We love each and every one of you.”

The country artist everyone was waiting for of the night, Cody Johnson made a big strong entrance to the stage opening the show with one of his new songs, Honky Tonk Hardwood Floors!

“We’re gonna play some new music from the album tonight,” said Johnson during the show. This particular concert was the first show of his tour and the first time performing since the release of his brand new album, Human: The Double Album which was released on October 8th. He performed several songs from the new record including Treasure, God Bless The Boy (Cori’s Song), Stronger, Longer Than She Did, Son Of A Ramblin’ Man, Let’s Build A Fire and Human.

Along with that, before Johnson performed his current single at country radio, he talked about how music on the radio doesn’t actually sound like country music. “We’re trying to change that.” said the artist. “If you don’t mind, request this song for us, this is our brand new single out to country radio, it’s called ‘Til You Can’t.” Johnson made a point as well during the show to give a great long speech talking about what he believed in and to say that he was very patriotic.

Cody Johnson’s energetic vibe was felt throughout the show while he continued to perform more of his big hit songs including With You I Am, Wild As You, Ride With Me, Dance Her Home, Diamond In My Pocket, Me and My Kind and Nothin’ On You.

The singer songwriter closed out the night with a great cover of Charlie Daniels’ song, Long Haired Country Boy, and two of his own songs, On My Way To You and Dear Rodeo but before he sang his last two songs of the night, he gave a touching speech thanking his fans for helping to make what his music career is today.

Johnson talked about how because of his fans, he’s been able to stay true to his cowboy ways and continue to work with the people he wanted to work with and perform at the places he wanted to play. The artist then talked about his big hit, On My Way To You and mentioned the latest achievements he has received on his music. “We released this song to radio and after about 12 years of playing independent with numerous hits on the Texas country music chart, ladies and gentlemen, you gave me the opportunity to have this song go platinum on national radio.”

The Texas native continued with his good news and giving the spotlight to his fans, “Without you we don’t have a damn leg to stand on,” said Johnson. “So you’ll be happy to know in some of my recent news that I got is not only did this single go platinum because of you it’s fixing to be double platinum. Diamond In My Pocket, it’s gold. Dance Her Home, gold. Nothin’ On You and Dear Rodeo both gold. What you’ve done for me in the last two years of my life is you’ve helped me put my feet in concrete and stand up for country music.”

Check out The CMBeat’s gallery of photos from the show!

There’s no question, Cody Johnson’s show is definitely the best traditional country music concert you will ever see and is highly recommended! The whole show was on point and never missed a beat when it comes to sound, production, entertainment, having a great time and most importantly the music. A big round of applause goes to Ian Munsick and Easton Corbin as well, both of those artists were a terrific addition to the show! This concert will certainly leave you wanting more along with becoming a fan of Cody Johnson and Country Music!

Have you seen Cody Johnson in concert before? I’d love to hear your thoughts, so leave me a comment below or on social media!