A incredibly talented woman originally a Springdale, Arkansas native, Jenee Fleenor has been dominating the scene in the country music industry! You may recognize her from several places as she’s apart of NBC The Voice’s band, apart of Blake Shelton’s band and is a session musician in Nashville!

The amazing artist recently got time to chat with me about a few things including some of her musical influences and some of her favorites memories! Along with that, Fleenor also talked about the best piece of advice she’s gotten about the music industry, winning her first CMA award and about her latest new music!

Emily Ann Wells: Who are some of your musical influences?
Jenee Fleenor: As far as popular artists, I was heavily influenced by artists that were masters at their instruments: Vince Gill, Steve Wariner, Ricky Skaggs, and Alison Krauss to name a few. As a teenager, I’d also scour the CD bins for albums that had my favorite session musicians names on them: Brent Mason, Paul Franklin, Sam Bush, Jerry Douglas, Mark O’Connor, Rob Hajacos, John Hughey…and so many more. 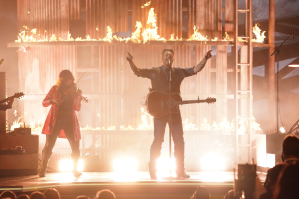 EAW: You have toured with a lot of artists! What’s one of your favorite memories from being on the road?
JF: Stepping on the stage with Blake (Shelton) for the first time was a thrill! I’m sure we had a soundcheck with the band, but I don’t even think I saw Blake until I was actually on stage with him. We were playing a casino in Oklahoma, and the next thing I know I was front stage fiddlin’ beside this 6 foot something funny guy that sings his country ass off! I also remember Kelly Clarkson dropping by, and we worked up one of her songs before the encore. As we were working up her tune, she said something like, “I don’t know if I can hit that high note!”…and someone popped off, “you’re Kelly Freakin’ Clarkson! Of course you can sing that note!”

EAW: What’s the best piece of advice you have ever gotten about being in the music industry?
JF: I keep wracking my brain over this question, but for me it seems like it’s a lot of seemingly ‘little things.’ Practice (I practiced an hour a day from the time I was 3 years old until I moved to Nashville….then I practiced some more!), a firm handshake – I learned at an early age the importance of a firm handshake (unfortunately, social distancing has put a stop to that for the moment), being on time (shows you respect everyone’s valuable time), perseverance (you’re gonna hear ‘no,’ but that’s okay! Keep going!).

EAW: If you could pick only one, would you rather be a session player or a traveling musician? Why?
JF: Wow, what a hard question! You know, at this point in my career, I would pick session musician. I’ve been lucky to have spent years traveling the world playing music, which I love a lot, but it’s taken me a lot of years to work up to being a session musician and that was always my one goal when I moved to Nashville. Every time (no exaggeration there!) I step in the studio, whether it’s on a tracking session or in my home studio, or right now I’m on the road and have my travel studio set up in my Mom’s spare bedroom – I say to myself “I LOOOOVE THIS!” Yesterday I was overdubbing on a song and trading licks with Brent Mason and I got the biggest smile on my face because I remember being a kid dreaming of playing music with Brent! 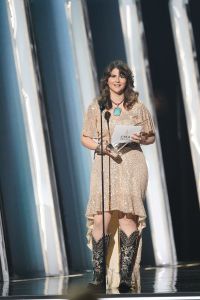 EAW: What was it like to not only win the CMA Musician Of The Year award, but to also be the first WOMAN to win the award?
JF: Accepting the CMA award was one of the most humbling and thrilling things of my whole life! I remember getting teary eyed when fellow nominee, Paul Franklin, walked to his seat by us…I just couldn’t believe we were in the same category together. He’s one of my heroes! And I’ll never forget hugging Joe & Tara Diffie right before I won the award…they made a point to be in their seats to cheer me on. As far as being the first woman – I never really realized that a woman had never been nominated. On a daily basis of doing session work, I am a lot of times the only woman in the room (besides the artist), but I have never dwelled on that. I always just wanted to be the best musician I could be, and my goal since I was a little girl was to become a “Nashville cat.” I may have broken this glass ceiling, but there is a long line of amazing women session musicians that come before me…Wanda Vick, Catherine Styron, Tammy Rogers, Andrea Zonn, Deanie Richardson, and Alison Prestwood to name a few!

EAW: You just released two songs, Fiddle & Steel, and Good Ol’ Girls. What was your favorite part about making them and releasing them?
JF: My favorite part about recording these tunes was the short three hours we had in the studio together! It always goes by so fast! Some of my favorite musicians, writers, and engineers in the world were in there that day, and I’m honored to call them my friends! Mike Bridgnardello (bass), David Dorn (keys), Dan Frizsell (engineer), Mike Johnson (steel guitar), James Mitchell (electric guitar), Phil O’Donnell (producer, songwriter, utility), John Willis (acoustic guitar), Lonnie Wilson (drums) were all in the studio that day. I also have to mention Mike Proctor – we had a blast doing overdubs and mixing together! – and amazing songwriter and dear friend, Buddy Owens – we co-wrote these songs together with Phil O’Donnell, and that process is always a fun one as well!

EAW: You have played on several hit songs. Do you have one you liked recording the most and why?
JF: Well, recording with Jon Pardi is always a blast! There was a magic about recording the California Sunrise album and I remember we were all in the studio together, and there’s a great picture of us all at the end of the last tracking session. We were all lined up for the picture and they had me hold the bottle of Jack Daniels…we are all laughing our asses off! (We may or may not have had a whiskey shot before the picture…haha).

EAW: What can fans of yours expect from you in 2020? Possibly more new music?
JF: Possibly! Or I may just release singles as so many artists are doing these days.

It’s truly remarkable all the things Jenee Fleenor has accomplished in her career! Fleenor has proven she can do anything she sets her mind to, from being a session musician, a singer/songwriter, being in a band or touring, to winning awards! There’s no question a lot of wonderful things are definitely in store for Jenee Fleenor in her journey!

What do you think of my Exclusive Interview with Jenee Fleenor? I’d love to hear your thoughts, so leave me a comment below or on social media!