A notable duo that has been in the country music genre for many years, The Bellamy Brothers, which the members consist of Howard and David Bellamy, recently made a stop for a show on January 19th in Forrest City, Arkansas, where they performed at the Eastern Arkansas Community College.

While the brothers played many of their popular songs, they also had just previously announced a new album coming soon, Over The Moon, due out on February 15th. If you would like to pre-order the album, you can do so by clicking the link HERE.

The group was glad to be there saying, “It’s nice to be here with you guys.” Some of the memorable tunes the duo performed included, Some Broken Hearts, Old Hippie, Let Your Love Flow, Redneck Girl, For All The Wrong Reasons and If I Said You Had A Beautiful Body, followed by an encore performance of I’d Lie To You For Your Love.

Along with touring, the brothers have been very busy with several things such as promoting their new book, Let Your Love Flow: The Life and Times of The Bellamy Brothers, plus spreading the word about their new television show that premieres on the Cowboy Channel and RFD-TV entitled Honky Tonk Ranch, showing a closer look into the singer’s lifes.

On top of all of those things, The Bellamy Brothers have a busy spring ahead of them as they are joining Blake Shelton’s new tour, Friends & Heroes 2019 Tour for 18 dates. The duo jokingly talked about the tour during the show by saying, “Blake isn’t successful enough, so we’re going to help him out!” Other artists that will be featured on the tour is John Anderson, Trace Adkins and Lauren Alaina. If you’d like to see more dates of the tour, be sure to check them out on Blake Shelton’s website by clicking HERE. 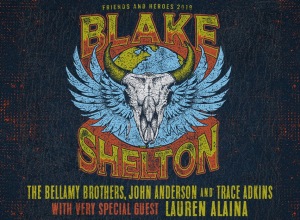 There is no doubt that if you love the music from The Bellamy Brothers, then you will be sure to enjoy them in concert. It was a great show and be sure to check them out online or see if they’re coming to a town near you soon!

What do you think of The Bellamy Brothers? I’d love to hear your thoughts, so leave me a comment below or on social media!