A fast rising country star from Asheville, North Carolina, Luke Combs hit the country airwaves two years ago with his smash single, Hurricane, giving fans a taste of his style and what we could expect more in his music. Now the singer/songwriter has finally released his debut album on June 2nd, This One’s For You.

The album starts out with a song that is a great pure country sounding song, Out There. When you’re listening to the song, you would think that is what the rest of the album will sound like, but Combs breaks past that mold, with the second number, Memories Are Made Of, a more heartfelt song about making memories that features a smoother side of Combs.

Lonely One, is the first slow song on the album that continues to show a softer side and is about not being the only lonely one. You can’t forget your regular beer drinking song as well, and that’s where Beer Can comes in to cue. The album also includes Combs’ debut single, Hurricane, that rose into iTunes Country Charts Top 10 the day of its release, along with into the Billboard Hot Country Top 40.

You can listen to Luke Combs’ debut single, Hurricane, in the video below.

My favorite song which is next off of the album, One Number Away, shows Combs’ easier but edgier sides, showing off different ranges and tricks with his voice, with the song’s smoky and intriguing lyrics. Don’t Tempt Me, is a outgoing song fans will like to dance to along with When It Rains It Pours, which was just announced as Combs’ current single, talking about having a good time and when things go your way!

One song that happens to be the title track, I believe is the most meaningful song off the album, titled This One’s For You. It is a great tribute that has a beautiful message to Combs’ fans and people who have followed him along in his musical journey so far. I think country music fans have never quite seen an artist do this in particularly for their fans/followers, so I think this song is definitely something special. 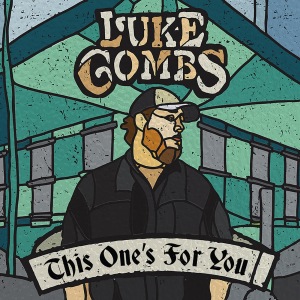 Combs’ features a lot of life-learning lessons in the album including, Be Careful What You Wish For, that has a great sense of what happens to everyone in life which you will definitely hear from the song’s creative lyrics. The artist slows things down one more time with the second to last song on the album with, I Got Away With You. Lastly, Combs’ ends the album with the best song possible, Honky Tonk Highway, a song that sounds like we should have been listening to it for years now, along side with Brooks & Dunn, Waylon Jennings & more, with how it talks about the life and highway of a musician.

If you’re a fan of Combs’ and didn’t know what to expect from his debut album, I can guarantee you won’t be disappointed but in fact, pleasantly surprised. In the album you will be able to imagine how a lot of these songs could easily be played at any local bar, or honky-tonk. It’s really refreshing to see a musician like Combs’, stick to his true country roots by showcasing today’s country, putting in a flavor of classic country and performing songs that have real meaning like country music is supposed to have, all in one mix.

This singer/songwriter could definitely have a comfortable spot between artists such like, Alan Jackson, Craig Morgan, Randy Travis and more with the likes of his instinctive voice and genuine lyrics. If you’re looking for new music, definitely check out Luke Combs’ debut album, This One’s For You, as it will for sure be one of the hottest albums of the summer, and perfect for your summertime playlist.

Have you listened to Luke Combs debut album? What did you think? Let me know your thoughts below or on social media!