After Rhonda Vincent finished playing at the Texas Troubadour Theater in Nashville, I had the opportunity to ask her a couple quick questions for The CMBeat’s first exclusive interview.

I asked Vincent about her new single, which is dedicated to the late, great Merle Haggard. At her performance during the Grand Ole Opry, Vincent debuted her arrangement of “Mama Tried,” the classic Merle song. 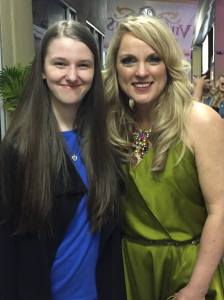 “It’s something I’m really proud of,” says Vincent, “My daughter Sally and Sonny Osborne sing harmony, which is something Sonny hasn’t done in ten years. His music is my favorite of all time; it was really special for him to come and agree to do that.” Vincent also spoke about the blending of their voices, “I’m just excited for people to hear the blend and Sonny was like ‘Oh My Gosh!’ What an incredible blend our voices have together.”

Vincent is planning to possibly film a video for this single, which would be the first music video she’s recorded in six years. Vincent is also excited about this project being the first worldwide release on a single or album she’s had in a very long time.

Since Vincent is always on the move, traveling or touring, I asked her what she likes to do in her free time: “I love to watch Everybody Loves Raymond,” says Vincent, “I really don’t get to do that a lot since we’re constantly on the move.” Vincent also says she likes to actually sit down and read what’s going on, on the internet, “I’m an internet junkie, so actually just getting to sit and look at Facebook, you don’t always get the time to do that.” Vincent dishes that she also loves being in the kitchen, “I love to cook, we’re constantly out eating on the road so it’s always a quest for food.” When she gets home she likes to just chill out, “I like staring at a blank wall and just sitting there for a while.” Vincent said that if there was one thing she wish she was motivated to do more is exercise, “It would be getting on the treadmill, or I have a trampoline that I enjoy.”

Vincent has done so many things in her career, I asked her what’s the one thing she hasn’t done yet that she still wants to do, “The one thing I’d like to really do is record with James Taylor,” says Vincent, “I’d like to record with and meet him, so maybe that’ll happen one day.”

Rhonda Vincent is so kind and such a wonderful woman. Thank you Rhonda for taking the time to interview with me after a long night of performing! If you haven’t heard of her, definitely go check her out at rhondavincent.com and follow her on all social media.

Have a thought about this interview with Rhonda Vincent? Leave us a note in the comments or let us know on social media!