One of the biggest well known artists in country music, Travis Tritt recently came to perform a sold-out show on his Set In Stone Tour at the Gold Strike Casino Resort in Tunica, Mississippi!

The singer songwriter was thrilled to be performing in Mississippi! “It is so good to be back here, thank y’all so much for having us!” expressed Tritt. “It is always a great time when we get a chance to come back down here, we look forward to it every time!”

Photo Taken by The CMBeat

Travis Tritt performed several of his big hit songs including Put Some Drive In Your Country, I’m Gonna Be Somebody, The Whiskey Ain’t Workin’, Where Corn Don’t Grow, Smoke In A Bar, Take It Easy, Anymore, Drift Off To Dream, Help Me Hold On, Country Club, Here’s A Quarter (Call Someone Who Cares), They Don’t Make ‘Em Like That No More, It’s A Great Day To Be Alive, Modern Day Bonnie and Clyde and T-R-O-U-B-L-E.

Along with those songs, he performed the song which is the title track of his newest album he released in 2021 and the name of his tour, Set In Stone. Tritt talked about releasing his latest album during the show! “We released a new album last year. It was my first studio album that I’ve done in about fourteen years,” said Tritt. “I was a little nervous about releasing an album after being out of the studio for that long but my fears were all kind of put to rest very soon because the very first week, thanks to folks like you the very first week the album debuted, it debuted at #4 on the Billboard Country Chart.”

One of the special moments during the show was when Travis Tritt honored two of his friends in the music business with one of them being, Charlie Daniels. He performed a cover of Daniels’ song, Long Haired Country Boy and shared the story about how they became close when Tritt was first starting out in his music career. “This guy was more than just a friend to me, he was a guy that was like a father figure and a grandfather figure. He was the first big star in the music industry that took me under his wing when I was first getting started back in the late 80’s. He took me out on the road with him and let me open shows for him and just gave me so much great advice when he didn’t have to do any of that but he did anyway,” said Tritt.

He continued to share what he loved most about Charlie Daniels and some of his favorite memories with him. “Charlie was exceptional at everything he ever did. Every instrument that you put in that man’s hands rather it was a guitar or a fiddle or a mandolin or a banjo, he played them all so extremely well and not only that but he played them to where it didn’t sound like anybody else. I was so lucky because not only did I have a tremendous friendship with him but for the last three major tours Charlie Daniels ever did in 2017, 2018 and 2019, Charlie did those tours with me. I have so many great memories traveling across the country with him and his band and seeing all different parts of the world and the things that I remember the most, the things I treasure the most, and the memories I treasure the most are the ones where when we were on tour during that three year period when it was just me and him sitting down talking together whether it was in his tour bus or my tour bus in a dressing room backstage before a show or after a show where we would just sit and talk together.”

Along with that, the other artist Travis Tritt honored during the show was his friend, Waylon Jennings. He performed two of Jennings’ songs including his duet with Willie Nelson on the tune, Mamas Don’t Let Your Babies Grow Up To Be Cowboys and Lonesome, On’ry and Mean. “Waylon was one of those guys that only did things one way and one way only and that was his way. That’s all I ever wanted to do when I first got started in this business was just do things my own way too,” said Tritt when talking about Waylon Jennings. 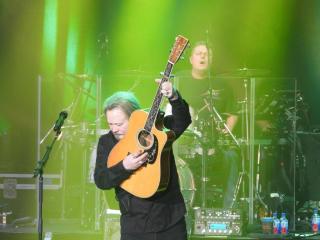 The most memorable part of the show was when Tritt shared his story about filming a music video for his song, Anymore. Naturally, if you’ve been a fan of Travis Tritt throughout the years, then you already know he is a big supporter of the United States Military and he explained how that came to be. “There has only been two things that have ever protected us in this country from our enemies and that’s almighty God and the United States Military, that’s it. Even though I knew that ever since I was just a child, I didn’t know too many people that actually had served and especially people that had served during War Time. People who were actually in battle.”

Tritt continues, “Until the early 1990’s, I think it was 1992 and I released a song that became one of the biggest hits that I’d ever have but the thing that was so special about it was a video that we did for it because the video gave me my first acting job and they wanted me to play the part in this video of a disabled American Veteran. Not only that but they told me that they wanted to actually shoot the video in a real life Veteran’s clinic down in Murfreesboro, TN. Everybody in the video for the exception of myself and three or four other actors everybody else that was in this video were actual Veterans that were either patients or staff members at this Veterans hospital. It was such an eye opening experience for me because in between shooting scenes for this video, I had a chance to sit down and talk with all these people. They told me amazing stories about battles that they had fought in and wars that they had fought in and injuries that they had gotten in war and no matter how bad any of their injuries were every one of these warriors told me the same thing, they said you know what Travis if we had a chance, we would do it all over again. That is the United States of America that I have come to love.”

The country music artist continues in his speech to say once the music video was finished and he returned to his home state of Georgia, he made a few phone calls to see how he could help more which led to some incredible experiences for him. “I called all my Senators and my Congress people and I told them I said listen I know I’m just a country music singer, and there may not be a lot that I can do but if there’s anyway that I can use my voice or my talent or my platform to raise awareness of Veterans and Veterans issues in this country, I would like to sign up to volunteer for it. As a result I had the wonderful privilege, the wonderful opportunity, the honor of being able to serve as the Celebrity Chairman and the Celebrity Spokesperson for a wonderful group known as the D.A.V. the Disabled American Veterans for four years in a row. After that four years was over, I had a chance to serve in that same capacity for two more years with another special group, a group known as the V.F.W. the Veterans of Foreign War.

Tritt goes on to express how special that time in his life meant to him. “That six year period was one of the greatest times of my life because not only did I get a chance to travel all over the United States and visit dozens and dozens and dozens of military installations all over this country but I had a chance to do that all over the world and everywhere that I went during that six year period, I not only got a chance to entertain the troops, but I had a chance to sit down with them and shake their hands and talk with so many of these men and women that if you looked up the word hero in the dictionary as far as I’m concerned all their names and all their faces should be right there next to that word because that’s what they are, they are American Heroes,” said Tritt.

Travis Tritt closed the show performing an encore with his song, T-R-O-U-B-L-E and followed with two songs by Chuck Berry entitled, Rockin’ On The Railroad and Little Queenie. “You’ve been a wonderful audience! God bless you. Thank you for coming!” said Tritt closing the concert with a standing ovation! There’s no question, Travis Tritt puts on a fantastic show! The concert was entertaining and showcased all the great country music he has created throughout the years. This show was fascinating to watch and it was remarkable to see how Tritt stayed authentic to himself. If you’re a country music fan, you definitely don’t want to miss seeing Travis Tritt in concert!

Have you seen Travis Tritt in concert before? I’d love to hear your thoughts, so leave me a comment below or on social media!