A lot of things have changed this year in the music industry including how we now experience concerts. While this way of seeing concerts is only temporary, a common new way to watch a concert is online!

One of the biggest outdoor retailers in the US, Camping World has brilliantly partnered up with several country music artists to create a free-online concert series which will be happening through this fall!

The Camping World Concert Series has already had a couple shows so far which have included country music stars like the band, Alabama, Chris Young and Martina McBride. There are six more weeks of shows which will run through November 24th and feature artists such as Lady A, Little Big Town, Vince Gill & Amy Grant and more.

Along with that, each show is hosted by the one and only, Shawn Parr from Shawn Parr’s Across The Country, as he also chats with the stars during the concerts!

As a special bonus to the shows, if you tune in 30 minutes before the concert starts, they feature a couple upcoming country artists to showcase them as well!

Here’s a full list of dates and upcoming country music artists who will be featured on the Camping World Concert Series! 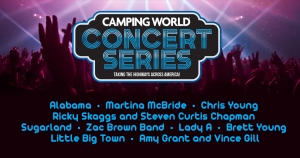 You can watch the live concerts each week by going to Camping World’s Facebook page, Twitter page or on their YouTube channel! A big thanks to Camping World for this great series! If you’d like to learn more about Camping World, be sure to visit their website as well, www.campingworld.com.

What do you think of Camping World’s Concert Series? Have you been watching and who’s been your favorite artist so far? I’d love to hear your thoughts, so leave me a comment below or on social media!