One great singer/songwriter, Brinley Addington, has been paving his way in Nashville for a few years, but he’s walking a new road, by releasing his long awaited debut EP available now entitled, Songs From A Bar.

This debut EP from Addington, couldn’t be named any better, because it perfectly describes this collection of music. The record has a great combination of songs you’d expect to hear play at a bar, which are your country heartbreak and party songs.

The first song on the EP, Those Kinda Songs, mentions some famous past country music artists we know and love, such as Willie Nelson, Waylon Jennings, and George Jones, as it talks about sometimes you can’t listen to those songs that bring back certain memories.

Along with mentioning some big names in his songs, he also includes some lyrics country music fans might be familiar with like at the end of his song, No Thanks. The particular single talks about how if the atmosphere he’s in ain’t having a good time, he’s not interested, which a lot of people can relate to!

The third song keeps the record on the same lines, with Better On A Barstool, discussing how everything is nicer when you get to stop and enjoy the moment. It wouldn’t be right if the EP didn’t include at least another heartbreak song, which Addington’s next to last song covers that. Another Heartache, talks about how some people just don’t want as said, another heartache.

This project ends off strong on a high note, with a very energetic song, If It Don’t Have A Honky Tonk, that was co-written by Neil Mason, Aaron Eshuis, and one more familiar name you might recognize, Ryan Hurd, who is a country music artist himself and is the newlywed to Maren Morris. 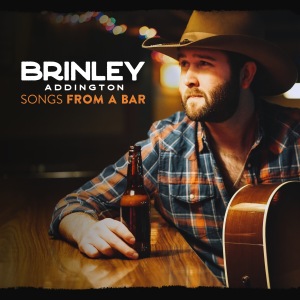 All country music fans alike will love Brinley Addington’s debut EP, Songs From A Bar. The album has a variety of songs on it that a lot of people can relate to. What makes this EP unique, is the fact that it has a great traditional country music sound which is a rare thing to find these days. This is definitely a project that will be on everyone’s summer playlist.

What do you think about Brinley Addington’s debut EP, Songs From A Bar? I’d love to hear your thoughts, so leave a comment below or on social media!