A rising country artist, Mike Ryan, has been working his way through the country music scene for several years now, with his music, and his songwriting abilities nailing him his first #1 single. His recent achievements include being named as one of Pandora’s Country Artists to Watch 2018.

The singer/songwriter recently found some time to talk with me to discuss how he got in to the music business, one of the coolest things that has happened to him so far in his music career, and what it was like working with a couple mega country music stars on his new album, Blink You’ll Miss It.

I asked the singer/songwriter about how long he’s been in the music industry and how long he’s been listening to country music, and it was obvious that this isn’t Ryan’s first rodeo. “I’ve been playing for about 10 years now. I’ve been listening to country music all my life.” says Ryan. The singer says he does like different genres besides country, but understands truly just how country music can be so relatable and started developing his craft from earlier on in his life. “I like all different types of music, but I felt like I related to country music the most from an early age and I sang all the time.” Continues Ryan, “Through the years, I picked up a few instruments and then really started focusing on writing/playing and putting a band together when I was in college.”

When it comes to the some of the singer’s musical influences, he mentions some pretty interesting artists. “The Eagles are probably my favorite band of all time, but there are many other influences… Stevie Ray Vaughan, ZZ Top, Cross Canadian Ragweed, Clay Walker, Clint Black….” says Ryan. He also talks about some goals in his career, showing it’s clear that he wants to stay true to country music’s roots with songs that have real meaning to them. “I just try to write music that tells a good story and that makes you feel something, then, I’ll throw in some fiddle, a steel guitar or a Telecaster (sometimes all three)!” says Ryan. “That’s what I got out of country music when I fell in love with it growing up, so I’m just trying to keep that going.”

There are two big names that country music fans will easily recognized off of the credits on Ryan’s new album, Chris Stapleton and Brad Paisley, whom Stapleton co-wrote one of the featured songs, One Way, while Paisley has a brilliant guitar solo on the last song, The Rewrite. When Ryan described having the duo on his upcoming project, you could tell he was excited to have them come be apart of it. “It was really cool and a true honor to have them involved. I’ve been writing for Sea Gayle Music for a few years now which is how that all kinda came together. Chris also wrote for Sea Gayle for a long time and he wrote a ton of music. Literally hundreds of songs in his catalogue.” Continues Ryan, “I got to listen to a bunch of them and ‘One Way’ really grabbed me. I was thrilled that I had the opportunity to record the song for this record.”

Some country music fans may not know this fact, that Brad Paisley owns Sea Gayle Music with singer/songwriter, Chris DuBois. The two combined with a couple of other people that actually helped Ryan create his first #1 single as a songwriter. “DuBois and I have written a bunch and Paisley and DuBois have written a bunch, but one time we all teamed up with Smith Ahnquist and Brent Anderson and that’s when a song called “Last Time For Everything” was born. Brad ended up recording it leading to my first-ever outside cut. That’s pretty good news for a songwriter!” says Ryan.

You can listen to Brad Paisley’s song, Last Time For Everything, written by Paisley, Chris DuBois, Smith Ahnquist, Brent Anderson, and Mike Ryan, in the video below!

It also just so happens that Brad Paisley helped make one of Ryan’s most memorable moments this far in his music career! “The Rewrite was a song that Brent Anderson and I wrote with Chris DuBois and we felt like Brad might like to hear it. Turns out, he loved it but thought the solo section needed some work. So, he went ahead and burned one down for us and sent it on back. It’s one of the coolest things that’s happened to me, so far in the music business.” 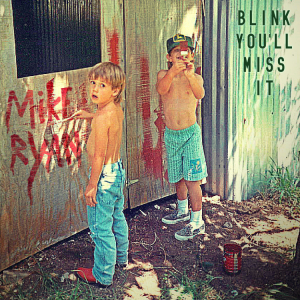 Looks like that this singer/songwriter, Mike Ryan, knows and has what it takes to make it in the music industry. He has a great singing quality, and a excellent taste in his songwriting along with his song selection. With the dedication that this artist has, he is definitely determined to work his way up to the top. This is only the beginning for Ryan, with his singing and songwriting career, and look forward to seeing more of his accomplishments in the future!

Did you like my interview with Mike Ryan? I’d love to hear your thoughts, so leave me a comment below or on social media!