The lights went down and the curtain went up to create another memorable night at the Grand Ole Opry in Nashville, Tennessee!

Starting out the show was the wonderful Larry Gatlin and the Gatlin Brothers! They sang a few of everyone’s favorites including, “Houston,” “She’s A Broken Woman,” and the one we all sang
along to, “All The Gold In California.” (See? Just now I started singing the lyrics when I was typing to the title out, LOL!)

After Larry and his Brothers finished singing “Houston,” Larry spotted a group of young people in the crowd playing with their mobile phones. Without missing a beat, he pointed to the kids and said, “This row of kids right here are Googling to find out who The Gatlin Brothers are!”

Later, Gatlin introduced the next act, Maggie Rose, who was making her 35th appearance at the Opry that night. Rose sang a couple of her songs including, “Underneath The Same Sky,” “I Love Me More,” and a song she wrote with Corey Crowder called “Broken”, for which she filmed a music video at the Grand Ole Opry!

After Rose, The Del McCoury Band and Chris Janson both performed, but one of the most special performances of the night belonged to a group that were making their Opry debut – The Brothers Osborne. 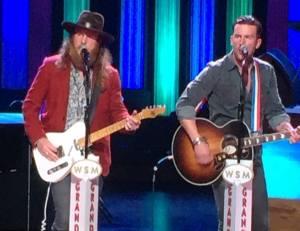 The Brothers Osborne first performed their current single off their new album, “21 Summer,” then played “Stay A Little Longer,” which was the Brothers’ first #1 single. They ended their portion with a beautiful tribute to Merle Haggard with a cover of his song, “Natural High.”

Next up was the artist who has picked up where Taylor Swift left off… the awesome Kelsea Ballerini, who hails from Knoxville, Tennessee. Ballerini performed her first hit single, “Love Me Like You Mean It,” then sang for the first time at the Opry her current single, “Peter Pan.” She closed her portion with an Allison Krauss song, “Ghost In This Town.” 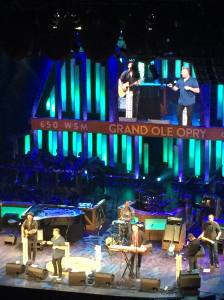 Then the main act of the night came out and just blew the crowd away… the ever-popular Rascal Flatts! They performed some of their best-known songs, including “Summer Nights”, their current #1 single “I Like The Sound Of That,” “Mayberry,” “What Hurts The Most,” and closed it with one of my favorite songs, “Life Is A Highway!”

Many artists that night mentioned the late Merle Haggard due to his sudden passing. Jay from Rascal Flatts told a story about when the group got to meet Merle back when they were first starting out. The group had gone to Merle’s show to meet him. After they met, Merle asked them, “What kind of music do you play?” Jay replied, “Country Music.” Merle then said “Not with that damn earring you don’t!” Needless to say, Jay no longer has an earring!

I couldn’t believe how many great acts were all in one show! They were all so unimaginably awesome! It’s one of the best times I’ve ever had in my life and definitely a night I won’t and can’t possibly forget!

Go check out these amazing artists and if you’re in Nashville, definitely go to the Grand Ole Opry!

Have you ever been to the Grand Ole Opry? Tell us about it in the comment section below or let us know on our social media pages.