A upcoming country music a capella band, Home Free, just got to cross off a big thing on their bucket list by headlining two nights at one of the most famous venues in Nashville, Tennessee, being at The Ryman Auditorium.

Home Free got the opportunity to headline for two nights on the historic stage on October 11th and October 12th. The CMBeat had the privilege of attending the first night and it could not have been a better show!

If you haven’t heard of Home Free before, they are a “a capella” group, meaning they only use their voices to perform or sing with. The band won season 4 of NBC’s show, The Sing-Off, and has been making their way to stardom ever since. They have created an amazing fan base online and even just launched their own record label, Home Free Records.

“Nashville, are you ready for a party?!” exclaimed Austin Brown, one of the members of Home Free walking out onto the stage to start the show. Another member of the group, Tim Foust also chatted with the audience saying “Welcome to the Mother Church of the Dive Bar Saints!” Everyone in the band was thrilled to be there, as Tim Foust said it very excitingly, “We packed The Ryman!”

Home Free performed a variety of songs, while opening the show with Remember This and Leave This Town, two tracks from their newest album, Dive Bar Saints and continued with more songs from the record such as the title track along with Catch Me If You Can, Lonely Girl’s World, Dreamer, Take Me Home Country Roads and Love Me Like That.

The band did a lot of great cover songs as well that include My Church by Maren Morris, Castle On The Hill by Ed Sheeran, Elvira by The Oak Ridge Boys, Old Town Road by Billy Ray Cyrus & Lil’ Nas X, and Some Girls Do by Sawyer Brown.

A couple of memorable moments during the show has to include when they let one of the co-founder’s of the group, Adam Rupp, do a solo performance, beat boxing and doing a great imitation of Michael Jackson, by dancing the singer’s classic moves and singing a brief clip of Jackson’s song, Billie Jean. The other special moment of the show, was definitely when Home Free brought out a songwriter, Jeffery East to participate in singing a song he co-wrote for Home Free’s latest album called, Why Not! 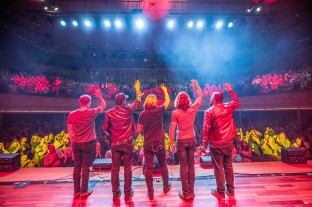 As a surprise to the audience, Home Free came back out for a two song encore, performing a cover of Crosby, Stills & Nash’s tune, Helplessly Hoping and a cover of Johnny Cash’s hit song, Ring Of Fire. While singing Helplessly Hoping, Home Free was singing it completely a capella with no microphones, their voices breathtakingly filled The Ryman Auditorium, and right before the song ended, a fan yelled out “Thank You” from the crowd, perfectly capturing what every Home Free fan in the audience felt at that moment.

If you have never seen Home Free in concert, they are definitely a show you don’t want to miss! There’s absolutely no question Home Free has an amazing unique show, from entertaining, to showcasing their incredible vocals and the way they combine their voices together. The other thing that is impressive with Home Free, is you can easily tell they are very appreciative of their fans, by the way they interact with the audience. Everyone who likes great music, should definitely go see Home Free in concert!

What do you think about Home Free? Have you seen them in concert before or got to attend one of their shows at The Ryman? I’d love to hear your thoughts, so leave me a comment below or on social media!