A upcoming country music singer songwriter originally from south of Seattle, Washington, and now a Nashville, Tennessee native, Jess Jocoy, is making her way in the country music scene around town, showcasing her unique new sound.

The artist recently got to chat with me all about the process of making her intriguing debut EP, New Heart / Old Soul, about creating the songs on the project, along with how the music is relatable while going through different phrases in life. She also talks about what the special thing is about country music that caught her eye.

Emily Ann Wells: The songs are from your experiences, which one is the closest to you? Why?
Jess Jocoy: It’s hard to say which song on New Heart/Old Soul is closest to me – it’s very much an introductory record to myself, as an artist, and simply as a person, so each song is personal. “The Time Between (Pilgrimage)” is probably the song that speaks of me the most: if you want to know about Jess Jocoy – here she is. It’s a an autobiography of moving from childhood into adulthood, and recounting those years for their ups and their downs. From growing up in the Pacific Northwest, to fishing with my father, to moving across the country to chase a dream. It’s learning that life is hard, and love is mean – but only if you let it be.

EAW: How long did it take you to write and collect the songs for the EP?
JJ: I started writing most of these songs about a year and a half ago, when I was in my senior year of college. I was studying Songwriting at Belmont University in Nashville, and really feeling the pressures of the idealisms that come with living in Music City. The songs themselves were written relatively quickly – it was finding the right time to record and release them.

EAW: Which song did you enjoy creating the most? Why?
JJ: I loved writing “Long Live the Song” because it’s somewhat of an anthem. I was raised on 80’s and 90’s country music, and it wasn’t until I moved to Nashville that I really started to delve into Classic Country from the 50’s on, but my world changed when I did. I was working at a Nashville-based clothing company, Project 615, at the time and was working in the shop when a customer walked in while I was listening to “El Paso” by Marty Robbins. He turned to me and said, “You know, they just don’t make music like this anymore” and the idea struck me. There are folks making music like this, but it’s not as widely popular as some other genres. I started thinking that – How is it that people still know the words to Johnny Cash’s “Ring of Fire” or Marty’s “El Paso”? The songwriters and the singers may not be around anymore, but those songs will probably live on forever – as long as there are people still singing them, because they are great songs and because their were told so well. “Long Live the Song” is a tribute to great works of art.

EAW: If you could tell new listeners just one song to take a listen to, to get the vibe of the whole EP, which one would you say and why?
JJ: This question is harder to answer than I thought it’d be. Each song tells a different story, and each has its own sonic flavor, if you will. Overall, though, to get the vibe of the whole EP, I’d say give a listen to “A Thousand Ways to Disappear”. Story-wise, it’s a recount of my time living in Nashville; observing this city, its flow, and the artists living here trying to make an honest go at making it. Each song has a country feel, instrumentally, and this song is no different. It’s a little bit melancholic, but also hopeful: Sometimes I’m walking around wondering if anyone can hear me and my music above the noise. In that, I’ve learned there are about a thousand ways a person can disappear – lose themselves – in this city. But, in the end, I’m not going back to where I came from. This is home, and I have goals that can’t go unaccomplished. 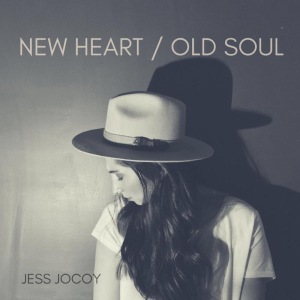 EAW: What do you want listeners to know when listening to your EP?
JJ: My hope for listeners is that they’ll take in the lyrics – which is a big ask in the age of short attention spans. I write songs with the intention to say something, not just to string along some words on a page for the sake of calling myself a songwriter. I think there are messages in there that will resonate with folks because it’s real emotion. Melancholy is a word I use often because I’ve tasted the bitterness of heartbreak, and of sadness. I’m not afraid to speak to it because I believe that knowing sadness makes the feeling of joy and hope that much more powerful. Hopefully, the audience will understand that, too.

If you like finding out about new upcoming artists, then you will be sure to love Jess Jocoy and her debut EP, New Heart / Old Soul! You can easily tell that she definitely put a lot of hard work into making this music for the record, telling her own story in such a captivating way, in hope the listeners will truly connect with her songs.

What do you think of Jess Jocoy and her debut EP, New Heart / Old Soul? I’d love to hear your thoughts, so leave me a comment below or on social media!