A very talented country music artist, Hunter Hayes, has been out touring for the past two months featuring opening act, Levi Hummon on the Closer To You Tour! On Friday, May 31st he brought the intriguing tour to the Manchester Music Hall in Lexington, Kentucky.

The incredible show started off with Levi Hummon of course, performing Change My Life, a song that is featured on his latest EP entitled, Patient. He actually revealed that the event was his first time performing in Kentucky by saying, “Thank you for coming out all this way for my first time in Kentucky.”

Hummon was very thrilled to have the chance to be out on the road on this tour as he said quote, “I could not be more grateful to be here tonight.” and continued, “Thank you so much for just hanging out with me.” The singer songwriter performed a lot of his popular songs such as Don’t Waste The Night, Songs We Sang, Stupid, his latest single, Night Lights, a new unreleased song entitled, State I’m In and so many more. Hummon also brought out a special guest, his father Marcus Hummon, to sing one of many hit songs he has wrote, Cowboy Take Me Away by The Dixie Chicks.

Next up was the artist everyone had been waiting for, Hunter Hayes, made his grand entrance with a fantastic intro of Feeling Good, originally by Michael Bublé. After his opening number, Hayes stopped to take a few minutes and actually talk with the fans in the crowd by saying, “Hi, How are you?” and thanking everyone for showing up for the show. He talked about how “it’s been a minute” since the artist has been out in the public eye a lot in his music career, but took the chance to explain why he’s been quiet the past couple years.

Hayes first off thanked his fans for having his back for the past 4 years and told one of the lessons he has learned and wanted to share the wisdom by saying, “You don’t have to be anybody but yourself because you are good enough.” He also said he had some music put together previously but scrapped it all and started from scratch again to put out the best music possible. Hayes was proud to say, “I’m happy you’re here for the show, this marks a new beginning for me.”

The musician also mentioned how thrilled he was to have his opening act, Levi Hummon out on the Closer To You Tour with him by saying Hummon is, “One of the coolest sweetest people.” 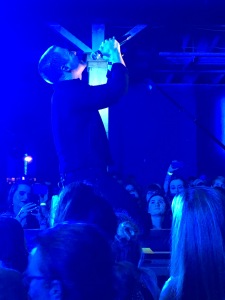 After Hayes’ great speech, he then continued on to play SO many fan favorite songs of his including Storm Warning, Wanted, Rainy Season, Somebody’s Heartbreak, Everybody’s Got Somebody (a collaboration with Jason Mraz), Love Makes Me, This Girl, You Should Be Loved, Secret Love, One Shot, I Want Crazy and so many more as well as his latest single, Heartbreak. Not to mention, Hayes also played a couple new songs that might be released in the near future on a new album.

You could easily tell that Hayes enjoyed what he was doing on stage, and also shared the spotlight with his band members, giving them a chance to play solo as well. He took another pause in the show to say, “I love and hate our social media lives”, as these days our generation focuses to much about social media, and continued on by saying, “I think we all have an incredible story to tell,” says Hayes. “Every person in this room has a powerful story to share.”

Overall, there is no absolute doubt that Hunter Hayes along with Levi Hummon, definitely gave the show all they got for the audience. These artists obviously love what they do and truly appreciate their fans. Hayes probably would have played any song of his if a fan asked, just because he enjoyed playing and performing. Along with that, Hunter Hayes is a very talented musician, which is just an added bonus on top of his kindness, realness and his music. Hummon and Hayes are certainly a dream team put together. If you are a Hunter Hayes fan, there is a 100% guarantee you will leave his show an even BIGGER fan. Thank you to both of these artists for putting on such an amazing show!

Did you get to attend one of the shows on Hunter Hayes’ Closer To You Tour? I’d love to hear about it, so leave me a comment below or on social media!